George O’Connor is a history guy who has created a series the retells/recalls/reillustrates the Greek mythologies of The Olympians published by First:Second.

So far there are six in the series … Zeus, Athena, Hera, Hades, Poseidon, and Aphrodite. Each is a little different, depending on the stories O’Connor chooses to tell, and each relies on the others to fill out the complex and interrelated mythology. 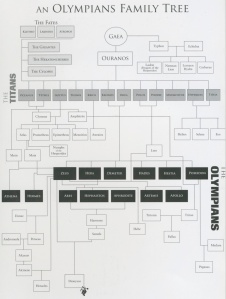 And what an interrelated  mythology it is! Luckily O’Connor gives the reader this handy-dandy family tree at the beginning of every book. I refer to it often to check and see if I am creeped out by Hades in general, or specifically because he is kidnapping and wooing his niece!!!! And by wooing I mean sweeping down in his big chariot of death and taking Persephone to the underworld and telling her he is going to marry her because Zeus said he could.

The gods marry each other at an alarming rates. They also have affairs with each other, with other immortals, with mortals, and with various and sundry animals. They scheme and plot and generally act like middle school children with too much time and power. 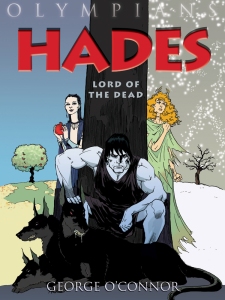 O’Connor uses color to evoke mood and set tone effectively throughout the series, but I think he is at his best in Hades. The tale O’Connor tells is also the story of hoe Persephone came to the underworld. I was familiar with the deal she strikes with Hades – she gets a set amount of time on earth in exchange for living with him as his wife/mistress/companion for the rest of the time. But this tells how that deal came about in the first place.

As it turns out Persephone is a surly teenager who pretty much looks like this when she talks to her mother, Demeter.

The image (p. 14) of Persephone having a total hissy-fit at her mother while her friends look on is the perfect illustration of her world. Demeter is a concerned mom who made mistakes as a teen-god and wants to protect Persephone. (Demeter also happens to be the god in charge of all the things that grow and feed the piddly mortals on earth).

More important than the look of scorn from Demeter and general fed-upness from Persephone (I have a non-deity friend with a head strong daughter, and they look like this a lot) is the assault of perky color O’Connor uses to illustrate the world at this moment. The ground Demeter walks upon is a violent verdant landscape. The brush in the background is a rich thicket of dark green foliage. Even the clouds reflect a tinge of light green from Demeter’s handywork. 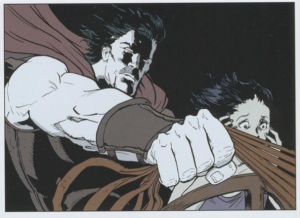 Here, in contrast, O’Connor gives use Hades and Persephone just after he snatches her from that same field and goes to the underworld (p. 22). Hades is darkness and shadows that swaollow light and give back nothing. Notice Persephone’s blue dress is not little more than a muddy, slightly tinted purple color. The background of the panel is a rich darkness bounded by the bright white gutter that sharpens the contrast.

The stark color shift helps set up the tenor of the story. As Demeter searches for her lost daughter, the rich and plentiful earth suffers from her neglect. When we do see some color in Hades’ underworld it is because of Persephone. The earth is dimmer, becoming a shadow because of Persephone’s absence. The underworld is become less drab because of her presence. O’Connor uses color to tap into our visual sense and tell part of the story.

There are 6 books thus far in the series with more to come. My favorites are Hades, Zeus, and Athena, although Aphrodite is fabulous, and Hera is a whole new way of looking at the story of Hercules. Oh! And Poseidon gives more details about the extended family.

Forget it. I love them all.

One thought on “The Olympians – A Serious Series”