Do you have a list of artists that no matter what they do, you are in? I have a few …

P¡nk. She can sing a phonebook, a dictionary, and random encyclopedia entries and I’d go to iTunes and buy the entire album (do we still call them that?) Here are a few reasons I am a huge fan –  her Grammy performance of Glitter in the Air and her tribute to The Wizard of Oz at the Oscars.

Anything painted by Rene Magritte makes my head hurt in the most wonderful ways. I think the fact that Scoot McCloud used Magritte’s work to explain representations of iconic images helped me better understand some of the layered complexity of graphic novels and comics.

There are others, but in general, what attracts me to artists is a sense of fun, commitment, and flexibility. There is a change over time that you see when artists express their own growth and learning through their performances.

Gene Luen Yang is a graphic novelist that is in the same category. His range in storytelling is amazing. From American Born Chinese in which a young boy, Jin Wang, deals with his own identity, subtle and not so subtle racism, romance, and a crazy cousin. Oh, and toss in is a dose of the Monkey King folk tales on the side just for good measure. I think what makes ABC so wonderful to teach with is the Chin Kee character. He is the best and more excoriating presentation of all of the Asian stereotypes rolled into one disturbing and guilt inducing character. I have had students cry after discussing Chin Kee and all the horror Yang shows the reader by putting it all out there and making it very hard to turn away.

Then, when I thought I had a solid handle on the kind of artist Gene Yang is, he went and created Boxers and Saints. I remain in awe of the historical work that must have gone into this two book set as well as the way he develops the protagonists, Bao in Boxers and Four-Girl in Saints. My friend and colleague Sterg Botzakis wrote a great review over at Graphic Novel Resources. 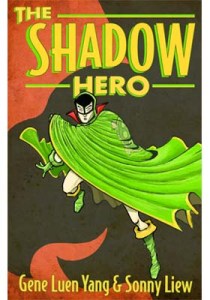 Yang’s newest novel with Sonny Liew, The Shadow Hero is a million miles away from either ABC or Boxers and Saints and yet it is completely his work.

This book is a solidly middle-grade book with loads of fun, excitement, and dashing heroes, including a few cameos by a SuperMan like character that influences the story early on. Set in 1930s Chinatown – I can’t help but read it as San Francisco – the novel tells the origin story of a little known comic book super hero called The Green Turtle. The Green Turtle was originally written by Chu Hing as a short run comic book but it never caught on like other superheroes of the time.

What makes The Shadow Hero such a rich graphic novel is the complexity of the characters lives. Hank Chu, the protagonist, is a young man growing with immigrant parents. Both Hank’s parents are from China but have very different back stories, as well as different expectations of America. Because of their differences, Hank grows up with a loving but distance and slightly disappointed mother, and a loving and grounded father. Hank dreams of taking over his dad’s shop when he grows up, but his mother has other aspirations. 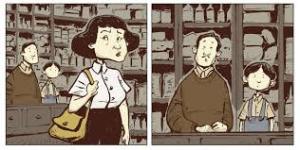 Hank’s relationship with his mom is … complicated. And that is the element that keeps this books moving forward in interesting ways. All the characters have well rounded back stories that gave me a sense of real life struggle and joy. Oh, that and the painfully bad martial arts training montages, the tricky protection clauses. and the eventual butt-kickery-ness of the hero. All of that.

Sonny Liew’s artwork is at once classic pulp comics with loads of motion and action, and a rather dull color pallets that resist bright white gutters that we have become used to with the high quality paper and printing available today. 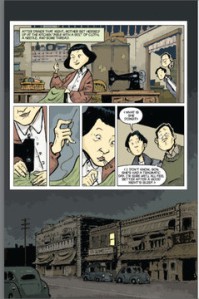 One comic convention that Liew uses with striking effectiveness are recessed panel groupings. He frames the action as a larger panel with several internal panels showing details and shifts in point of view, while still keeping the larger context in view for the reader.

The effect this has on my own reading is that I am focused on the intimate and furious action as Hank’s mom sews a superhero costume, loosing herself in the task while I, as the reader, am still aware that time is passing.

The Shadow Hero is an immigrant story, a superhero origin story, and a story about the lengths a young man will go to in order to become a hero in his own eyes. I enjoyed reading and re-reading this novel and plan on sharing it widely.

One thought on “Yet Another Reason to Love Gene Luen Yang”