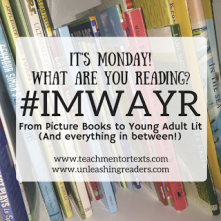 The fallout from my review of Ghosts by Raina Telgemeier has been interesting to say the least (read Swing and a Hard Miss here). Many people have said they had the same kinds of issues about the ways Telgemeier elected to depict a culture and history not her own. Read Debbie Reese (read her review here), the folks at Reading While White (their review with lots of comments here), and De Colores: The Raza Experience in Books for Children (the review can be read here ) for more details.

I’ll bet if you ask anyone who loves books why it is important to read literature you’ll get some sort of answer about learning to understanding the world. But, the hard part about this idea of learning about the world – the part that makes many people uncomfortable – is that the world isn’t made up of the one kind of people. Diversity happens and in my opinion books need to reflect the diversity of people in authentic ways, not simply the ways that have come to be expected.

One of my favorite authors, Joel Christian Gill (see his blog here) works very hard at showing authentic versions of the world. Gill’s first graphic novel Strange Fruit: Uncelebrated Narratives from Black History (2014) caught my attention because of the title, a reference to Billy Holliday’s song about lynchings in the South. It is a great collection of stories about African American heroes in American history. But, there was something noticeably missing from this collection of “uncelebrated” stories – Women. The irony that an author who wanted to shine a light on the fact that so much of American history ignores the contributions, both big and small, of African Americans, completely ignored the contributions of women was not lost on his audience. And, when readers pointed this out to Mr. Gill his response was shocking.

He listened. He thought about it. And he owned his actions. He has said his interpretation of the world is biased by his own male privilege.

He followed up Strange Fruit by introducing a series titled Tales of the Talented Tenth. The first book in the series covers Bass Reeves, a freed slave who became a US Marshal. The second in the series features the amazing story of Bessie Stringfield, “The motorcycle queen of Miami!” 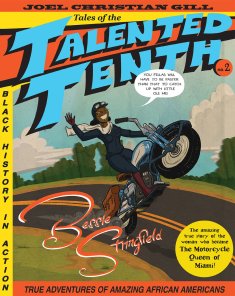 The graphic novel opens with an important forward by Dr. Sheena C. Howard who addresses intersectional nature of the book. It isn’t only about a woman, or an African American, or Jim Crow laws and society. It is about all of those things written in an authentic, respectful, fun and appealing manner.

The story opens with Bessie Stringfield meeting and talking with an unnamed and faceless interviewer. Using large panels, clear lines, and bold color schemes Gill walks the reader through Bessie’s early life – coming to American from Jamaica only to have her mother die and her father abandon her. Living in an orphanage where she was relatively happy and well cared for until she was adopted by a woman “doing her christian duty”. Bessie grew up with her “guardian angel” in Boston, MA. She had everything a young girl in the 1910s needed – a loving home, a good education, and eventually, a motorcycle.

Bessie’s adventures on the open road are nothing short of amazing. She was a young Black woman enjoying life on a Harley, criss-crossing the United States and parts of Canada without a care in the world. There is a double page map that shows Bessie’s routes across the US. I noticed that although she crossed the continental US 8 times (the first Black woman to accomplish that feat) she steadfastly avoide 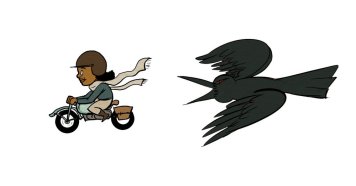 The map is the perfect introduction to the Jim Crow South that Bessie (along with every other African American who lived, worked, and visited the region) experienced. One of her 6 husbands gave her a copy of “The Green Book”.

“The Green Book” was a guide for safe restaurants, hotels, gas stations, and other businesses that would serve African Americans. Gill uses man-sized crows to illustrate racist White southerners who direct Bessie towards a KKK rally. The clans men are depicted at white hooded crows, burning a cross.

Once again, Gill uses his signature image of “black face”   as a way to depict the N-word. Just to be clear, this image is playful but not cute. It seems to cute the tension without loosing the power behind the message. Bessie is chased by a group of white hooded crows who have piled into a truck to pursue her. She gets away but it is clearly not the last time she encounters them.

The last chapter of the book covers her adult life – she joined an all Black motorcycle currier unit for the United States military. She was, of course, the only woman. She returned to school and got her nursing degree but she never stopped riding. Instead, she organized a motorcycle club for women and was eventually indicted into the AMA Motorcycle Hall of Fame.

Gill has given us another chapter of our American history. This graphic novel provides a glimpse into a brave and spirited woman’s life. This is a graphic novel that I strongly recommend across grade levels and content areas to teachers and librarians who want to make diversity the norm.