I use the term Booktoss as a way to communicate to the Literary Gatekeepers (read that as adults with money to spend on books) that we need to be willing to see the problems with books and toss some of them aside. There are always books I want to keep, and hold, and reread, and share. Those are the ones I pass along to parents, teachers, librarians, and most importantly children. Books that provide authentic views of lives and people and events. Books that are complex, complicated, heartfelt and heartening. Because there are authors who don’t find it necessary to tear down, dehumanize, objectify, or rely on tired stereotypes about mis- or under-communities for their books.

As a child, growing up in Southern California in the 70s, I saw no books that featured Chicano, Mexican, or Latinx characters. None … zero. When my own kids came along in 2002 and 2005 I looked for picturebooks with latinx  characters, but ended up settling for books with non-white characters. There still wasn’t much. 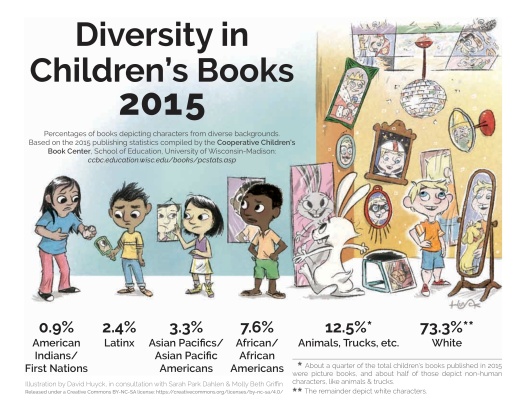 The official news from 2015 still isn’t good. There aren’t a lot of picturebooks that feature Latinx characters. In fact, you are more likely to see a talking rabbit than a Chicano kid in a book. Even given the scarcity exemplified in the CCBC infographic above the quality of the characters are also a HUGE question mark.

And, if the words … “But, what about SkippyJon Jones?” are about to come out of your mouth, just stop. SkippyJon isn’t Latinx. There is no connection between Latinx culture and a talking Siamese cat that goes into the closet, dons an outfit, and then hangs out with a gaggle of imaginary dogs. There just isn’t. If you want to read about the problematic nature of the inauthentic representation in the books, read these blogs:

Skippyjon Jones: Transforming a Racist Stereotype into an Industry

The problema with Skippyjon Jones

So, what should you be reading? You may ask? I’ll show you ….

La Princesa and the Pea written by Susan Middleton Elyr and illustrated by Juana Matinez-Neal.

It is a retelling of a popular tale – the princess and the pea – set in a Peruvian village. The authors use mostly English with some Spanish throughout the book. The queen is la Reina (Spanish for the Queen) and she’s got some serious control issues around her son, el Príncipe  (the Prince).

The story aligns with the familiar time worn tale. Elyr uses a simple and effective rhyme scheme to move the story along.  She seamlessly includes  Spanish words into the rhymes and, perhaps most importantly, the words are not translate them on the page. Instead, they are red and there is a glossary at the end of the book, if you need it. I would not go as far to say this is a bilingual book, but I would say it is a book that appreciate the Spanish language.

What elevates this book, for me, is Juana Matinez-Neal’s illustrations. They are gorgeous, intricate, and funny. I mean, really, laugh out loud, funny.

First there is la Reina, she is not pleased. She wears a red llicila (shawl) with a repeated pattern of little people on it, and a deep red montera (hat) that often hosts her cat, who is equally unimpressed. No woman is ever going to be good enough for her son, and she seems always on the verge of pinching or throwing a shoe (although, I may be giving her some of my own abuela’s attributions).

Juana Matinez-Neal has lovingly given us a book that reflects her culture. She includes a vast array of woven patterns, deep reds and oranges throughout. But, most importantly, she provides people who represent a spectrum of Peruvian-ness.

Some of the characters wear chullos (hats with ear flaps) while some women are wearing montera (wide brimmed hats that form a sort of bowl). The peoples skin tones are all different shades which shows the reader diversity even within a single ethnicity. Oh, and the chickens, roosters, and guinea pigs that are in constant motion provide yet another reason to come back to this book over and over again.

So, if, and when you are willing to ditch SkippyJon Jones in favor of actual latinx representations, start with La Princesa and the Pea.

After reading La Princesa, you’ll be ready for even more authentic Latinx kid literature! Among my favorite is Yuyi Morales’s Niño Wrestles the World, and the followup Rudas: Niño’s Horrendous hermanitas!

I found a YouTube video of the author reading her book and it is wonderful.

This, again, is not strictly a bi-lingual book but Morales uses Spanish throughout the book, and again without translations. In addition, she uses iconic Mexican characters, like Cabeza Olmec which looks like the huge Olmec heads found in Veracruz, Mexico. I love the energy, silliness, and wordplay combined with authentic cultural icons – not fake cats and mock accents.

Yuyi Morales is one of those authors who’s books I go back to over and over again. Her books are great for young readers … and anyone else who needs a laugh.