Comics are the medium or form – images and words working together, bounded by panel, to communicate. Any story can be told using the comics form, just as any story can be told in paintings, film, poetry, or traditional print-text novels. I study graphic novels, but lately I am not sure that term means what I think it means.

When I say graphic novels I mean long-form comics that are not Manga or comic books (sometimes known as floppies). But, the problem of defining a form that is constantly changing and evolving, like graphic novels, is that it is like trying to determine a toddler’s shoe size while chasing them around Disneyland. There is so much movement, excitement, fear, and joy that the point of the event (defining, this gaining clarity) is sometimes lost on the need to impose a structure.

The issue I am butting up against this week is what about trades? Trades are usually comic book story arcs that are originally  published as a set of floppies and then is published – without all the ads and previews – in a “graphic novel edition”. Examples are DC Comic’s Batwoman: Elegy (Rucka, Williams, & Jones, 2010), and more recently Marvel’s AMERICA: The Life and Times of America Chavez (Rivera et al., 2017). In other words, the big two (Marvel and DC) are putting out trades by the truckload (all the while canceling comic book series that feature people of color – but that is for a later post).

Trades are also being published by smaller presses and independent comic artists with the help of crowdsourced funding. One such project is Tee Franklin and Jenn St-Onge’s graphic novel Bingo Love  (published by Image Comics).

There is a lot to love about this graphic novel (I’m writing this post, so I’m calling it a graphic novel). The book opens with a large panel showing a young woman crying and being comforted by an older woman. The scene takes place in “Jenkins Home for Seniors in 2038”. The young woman has been kicked out of her home for “liking girls”. I have to admit that this opening had me worried. But, the older woman, Hazel, begins talking about when she first met the love of her life, Mari in 1963 at church bingo. 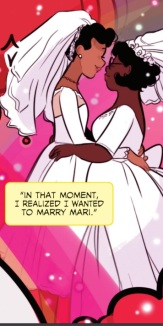 The story is told from Hazel’s point of view and so we see her attraction burst forth beginning with the first time she sees Mari. Although they are in middle school, it is clear to Hazel that she doesn’t simply like Mari as a friend. Instead she realizes pretty quickly that she’d like to marry Mari and live happily ever after.

The pacing of the book is the only thing that keeps it from being great. There are quick jumps in time that are accomplished by collages that show the progression. These quick jumps in the emotional narrative are a bit jarring and I wish Franklin took more time and space to develop the characters, including the minor characters, and the setting.

The girls grow up as best friends, but their friendship does’t change until they are older, perhaps seniors in high school. One day they have their first kiss, they confess their mutual love for each other, and get in trouble for that love. Both girls are told they cannot see the other. Hazel is ready to run away with Mari and make a life. Mari hesitates and all is lost.

We see Hazel get married to James, and by the time she was 38 she had three kids, was miserable and still dreaming of Mari. We see Hazel and James’s kids grow, have kids, and then, one Mother’s Day she goes to bingo with her daughter and then BAM … Mari enters the story again. The two women who shared a first kiss almost 50 years ago are reunited. But, not everyone is happy about the reunification of lost love … especially Hazel’s daughter, Marian.

This time Mari is ready to commit. The next section of the book is amazing. Love blossoms but it isn’t without complication. Hazel deals with her feelings, goes to therapy (which is something we rarely see PoC do in any sort of media!). Hazel begins to move away from the life without Mari and begins building a new life that includes love and her family.

The narrative focuses on women’s lives and their humanity. One woman is shown breastfeeding, another as her water breaks as well as just after she gives birth (there is even an umbilical cord!). Perhaps most importantly Hazel and Mari are shown as fully realized people with desires, humor, hunger, and even stinky feet.

One panel brings tears to my eyes every time. I want to spend some time on it here to explain why this book is important – important to bring into the classroom.

Look at all these women. Look carefully. What do you see? I see a multitude of shades, body types, ages, and sexual identities in one space enjoying life and celebrating love. This graphic novel celebrates the loving relationship of two older, black lesbians.