Like a boil that can never be cured so long as it is covered up but must be opened with all its ugliness to the natural medicines of air and light, injustice must be exposed, with all the tension its exposure creates, to the light of human conscience and the air of national opinion before it can be cured.

In King’s 1963 Letter from a Birmingham Jail he called out the what he referred to as “white moderates”. He held nothing back when he called out white moderate BS, “I have almost reached the regrettable conclusion that the Negro’s great stumbling block in his stride toward freedom is not the White Citizen’s Counciler or the Ku Klux Klanner, but the white moderate, who is more devoted to “order” than to justice.” Sound familiar?Today, in Children’s literature and other spaces, we deal with what I like to call  Well Meaning White Folks (WMWF) who deal with social justice issues by gaslighting, tone policing, and outright hypocrisy. These are the WMWF who support change as long as that change in no way calls for self reflection or action. 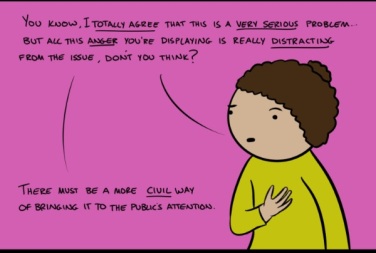 I can always tell when I am dealing  with WMWF by their rallying cry “be nice” or “choose kindness”, as if the act of calling out racism, misogyny, ableism and homophobia is the problem and not the act of racism, misogyny, ableism and homophobia. King was on to this BS when he wrote, “Actually, we who engage in nonviolent direct action are not the creators of tension. We merely bring to the surface the hidden tension that is already alive.” [emphasis added].

As a proud Latina lesbian and member of today’s Call Out Culture I gain solace by reading King’s Letter from a Birmingham Jail. Lately, some horrible truths have come out, specifically, Anne Ursu’s article highlighting the prevalence of #MeToo moments in professional #kidlit spaces. The resulting fallout and backlash has been hard to watch for many reasons including the defensive reactions of  WMWF who don’t want to air out, talk about, reflect on, believe, or change the engrained male* dominated power structures.

Recently a White male author, Marc Tyler Nobleman was called out on social media for participating in an all-White, all-male panel at a Children’s literature conference in 2018. He was so hurt by the public discussion of his actions that he decided to write a blog post about it. Let me be clear, Marc Tyler Nobleman, like many WMWF, claims to be an ally. So, when he was called out, his immediate response was to pull bucket after bucket from the seemingly endless well of defensive phrases that WMWF have at their disposal. He began by defending his choice of participating in an all-male, all-White panel with the ultimate in weak-tea excuses, “I did not think to ask who else was presenting.”

He pulls suggestions right out of the Protect the White Male Status Quo! handbook, “Rather than start with public shaming or snark, instead contact the event organizer and participants directly and privately to express the concern civilly.” Let’s be clear Well Meaning White Folks are more invested in protecting their uncontested vantage point of privilege than in changing a system that keeps them there.

No one is unaffected by the colonizing social structures that are in place and protected by the status quo. All of us are responsible for upholding White male dominance at one point or another in our lives. What many of us are asking for now is for WMWF to have the hard conversations, look at their own actions, and believe us when we tell you, “that is not ok and here are all the reasons why”.

– Stroke biceps
– Press boobs against arms and/or shoulders while taking selfies
– Touch his hair (including braids, dreads, afros, and facial hair)
– Stroke his bald head (seriously? WTF is that about?)
– Sidle up as he’s talking to a small group of people, and move a hand across his lower back/upper butt region
– Touch his butt

All of this was done silently and without consent. (There is also some really weird lesbian fetishizing but Malinda Lo covered that over on Twitter). And, before the pearl clutching begins, I know this is NOT the same as the #MeToo incidents in Anne Ursu’s piece, or the ones in the comment section of the School Library Journal piece. The reason this is important for our professional community to think about is that Black men live with the very real memory of Emmet Till and the White woman who’s statements got him killed. They live with the fetishizing of Black bodies by White people. This is another, different, way unchecked entitlement makes us all lesser.

Actions We All Need to Take

I am not going to ask you to sign a petition, or put on a pin or buy a ribbon. Instead, I am going to provide some helpful and actionable items for all of us.

And what should you do if you find yourself wanted to subject someone else with unasked for physical attention? You should ask for consent. This seems like a good plan for everyone in professional spaces … or any space, really. Ask before handling anyone, even if the handling is under the guise of flirting, humor, or as a result of that heady mix of alcohol and hotel keys.

And just in case you are confused, consent means saying the words that specify what you want to do and waiting until you get enthusiastic, verbal agreement. It would look something like this;
– “May I stroke your bicep?”
– “Ok if I put my arm around you and rest my hand on your ass?”
– “Can I rub your bald head?”
– “Is it ok if I press my breasts up against you?”

If you, Well Meaning White Women, feel embarrassed by asking a Black man for consent at a public book signing or other professional space thus putting your desire for physical contact with him into the of “light of human conscience and the air of national opinion” then you should not be doing it at all.

25 thoughts on “#KidLitWomen: An Open Letter to Well-Meaning White Women”