The last piece I wrote for this blog – my blog – was titled “Harshly” Judging Islamophobia. In it I called out Jack Gantos’s graphic novel A Suicide Bomber Sits in the Library for being racist and anti-Muslim.

My critique wasn’t unique. It was fairly standard fare as these days go. In fact, my reaction was echoed by many others – approximately 1092 others in fact! We all signed an open letter from the Asian Author Alliance addressed to the publisher, Abrams. I was one of the signatories to the letter and was relieved to see the resulting response from the publisher that they pulled the book. Abrams also did the usual “offense felt by” rhetorical move that put the blame on those who were offended and not on the offending parties. Again, nothing new; nothing out of the ordinary; nothing to break stride over. 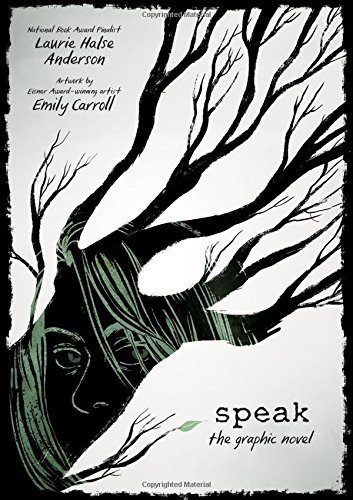 And then I was on to the next book, the next idea, the next article, the next class. I think I was finally going to get around to writing about Laurie Halse Anderson and Emily Carroll’s haunting, painful, beautiful graphic novel adaptation of Speak. It is a truly amazing and provides a new way for readers to connect with, bear witness, and see themselves through trauma and survival of sexual assault.

I love writing about books I think kids deserve. They might love a book because it holds surprises for them; or because it reflects them in ways that they have never seen before; provides them respite from their everyday lives; or shows them things they never knew or imagined. All of that was sorely lacking from my own literary history. And, again, I am not unique in this history. Marginalized communities do not have a body of children’s literature that reflects the varied experiences, histories, or imagined futures that privilege provides.

And that brings me back to A Suicide Bomber Sits in the Library, one of the most overtly racist graphic novels I’ve read in recent years. Lots of White folks celebrated, then defended the book (some without reading it, some after reading it). Many White folks defended the author, claiming that he was the real victim of yet another “Twitter mob”. Many left comments on my blog or on Twitter decrying CENSORSHIP!; WHAT’S NEXT? BOOK BURNING!; REVERSE RACISM!! and lots of THIS IS WHAT IS WRONG WITH SOCIAL MEDIA. Again, all this has become very run-of-the-mill for me and for the other #DiversityJedi.

And then I got a letter, and actual piece of snail mail, delivered to my university mail box. It was a normal day in academia – I was rushing from here to there and stopped to grab the catalogues, flyers, and announcements that had built up in my mailbox. I also grabbed that envelope that contained a hate filled death threat.

“Wait, what?” you might be saying. And, I don’t blame you, because that’s what I said as I stood on the sidewalk, backpack falling off my shoulder, a single piece of white paper dripping with violence directed squarely at me or at my online persona, Dr. Booktoss. The writer was angry and bitter and really, really violent. His grievance was that I had attacked a White author instead of going after the “murdering muslims” who deserve to be killed in horrible ways. He accused me of being an ISIS operative. He was angered by the fact that I was and had in my possession a “fucking dyke cunt” and I was a traitor to my country. He suggested I volunteer as a sex slave for ISIS, if they would even touch me, so they could fuck me in every hole until they were tired of me, and then they could cut off my tits and my head and post the video on YouTube. (The letter is worse.)

The letter stunned me. It stopped me cold as I stood on the street and for months since I have been stuck in that moment. My university has been great and taken many steps to make sure I am safe, but I do not feel safe. The fact that someone wants me to die in such horrible ways sticks with me, even as I write this. The chances that anything will happen are slim, but not none. There is a proliferation of hate, guns, and fear in this country that I cannot ignore.

I thought this was unique. But, it turns out it really isn’t. Many of us who do this work –  urging authors, editors and publishers to avoid lazy tropes that rely on racism, sexism ableism, and homophobia, as well as educate teachers and librarians to be critically conscious about the literature they provide to students – we receive hate mail and vilent threats. I had become used to the hate. After all, I’m an out Latinx lesbian who confronts and openly wants to disrupt the status quo of our society. I’ve gotten used to people disagreeing with me, defending themselves, accusing me of being a bully, or the real racist, or simply being too sensitive, rude and uncivilized.

So have many of the #DiversityJedi who are also women of color – Indigenous, Black, Latinx, Asian, Middle Eastern and so many more – who speak out against the assumed supremacy of unearned privilege. And, so many of us have been and continue to be threatened and harassed. We make jokes, we send each other memes and words of encouragement. Is it a surprise that this treatment has simply become part of our normal? Look at the society we are raised in! We are, literally, trained to take abuse in silence.

Not many of us talk about the hatred and harassment. One #DiversityJedi I talked to about the threats said, “you are like me. You only want them to see your strength”. We, as a group, don’t write about the public confrontations, emails, unposted comments, DMs, and letters that threaten our integrity, our jobs, and our lives. Instead, we stand, shoulders back and take it, trying not to show our fear, our anger, our vulnerability, and our exhaustion, and then we move on to the next.

I am trying to get up, trying to find my way back to writing. I am trying to navigate the fear and anger and temptation to be silent and ashamed in my fear. There are a few things that are helping –

And so, I’m going to follow in the footsteps of those who have been brave before me and I will continue to speak, continue to push, and continue to educate because nothing will ever change if we allow ourselves to be silent.

This blog post is part of the #31DaysIBPOC Blog Challenge, a month-long movement to feature the voices of indigenous and teachers of color as writers and scholars. Please CLICK HERE to read yesterday’s blog post by Dr. Liza Talusan (and be sure to check out the link at the end of each post to catch up on the rest of the blog circle).

8 thoughts on “Muted but Not Silenced”