Is it still 2020? I only ask because this year is lasting eons. I am beginning to think 2020 in the USA is an epoch (defined by Merriam Webster as “a time marked by an event that begins a new period or development”). Change is hard, so … there we are.

I am working on a lot of things but I miss writing about books. Someone recently asked me “well, what WOULD you do if all the “racism” you claim just goes away? You’d be out of a job!” As if I wouldn’t have other things to do. It was one of the zingers from social media that the doesn’t land but makes you think. If I was not witness to the epoch were White folks are waking up and exclaiming “racism? How RUDE!” and starting all the books clubs … what would I do?

I’d read and I’d recommend books to put in the hands of kids who need those books to save their lives.

Full disclosure. I have met Laurie Halse Anderson a handful of times in professional settings and we follow each other on Twitter. I have never shared a meal, so she is not a friend, but I also would’t ignore her if I saw her at an airport. So, a professional acquaintance.

I waited a long time to read WONDER WOMAN: Tempest Tossed by Laurie Halse Anderson and Leila Del Duca. The only reason is that I am not a big Wonder Woman comics fan. Let me be clear – as a preteen and teen lesbian I had a HUGE thing for Linda Carter as WW but really, I think that was more about the boobs and the spinning. But, that’s the thing. Wonder Woman is the creation of a White, cis, straight man, and so she took form as an idealized woman in that context. In all her iterations she is reacting and reflecting that White, male, cis, straight gaze, and that simply doesn’t interest me. I know a lot of comics scholars write about what Wonder Woman meant to feminists but she was never my thing.

What was intriguing to me was that the illustrator – perhaps for the first time – was a woman. I wondered how that would affect how her body was shown … was it going to be all ridiculous Hawkeye Initiative pose – “How to fix every Strong Female Character pose in superhero comics: replace the character with Hawkeye doing the same thing.” or was it going to show a variation of women who were not all the male “ideal”?

The story is an origin story of how Diana ends up in America, but this time it’s a bit more complicated and involves a daring rescue at sea, Syrian refugees getting to Greece, and Diana not being able to get back to magical island of Thermas-culotta (or whatever the island that I will always think of as Lesbos but I know it isn’t), a refugees camp, and Steve Chang and his husband (I’m sorry what?) Trevor helping Diana get to America. 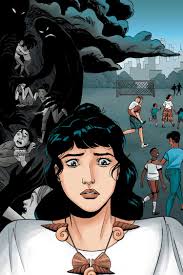 And that’s not even the BEST part of the book. I love what Del Duca has done with Diana. Laurie Halse Anderson wrote her like she’s 16 year old trying to figure out what that means on an island of women who were never children or teens! Del Duca handles Diana’s full range of emotions crashing together all at once deftly. The book deals with some important topics with a gentle hand. Diana ends up getting noticed because she is a polyglot; she can speak ALL the languages because … ok no reason is given, it is simply part of her. That’s how she ends up getting taken out of the refugee camp and to New York. But, the decision isn’t an easy one for Diana to make. She is fully aware that her status is changing because of her innate ability with language. In other words, she recognizes her privilege as nothing more than happenstance and nothing about it makes her better than the other refugees. She makes a vow to herself to use this opportunity to find a way to do good in the world.

Once in America, she has a lot on her mind. The fact that she is forever separated from her family and culture, her own identity – after all, she is 16 – as well as homelessness, and food insecurity in New York. Through it all she tries to help. It doesn’t always work, but that doesn’t make her stop trying. She ends up learning a lot about herself by hanging around other teens. She is humble and confused, and makes loads of mistakes but she keeps trying. One trait I loved was that she listened to the kids who we usually ignore and by listening, and believing them she is able to put an end to an ongoing sex trafficking ring and the local government corruption that allows it to happen.

Like I said, there is a lot, but it is done well, and in age appropriate ways. Del Duca and Halse Anderson give us a wide range of races, cultures, classes, genders, and sexual orientations that actually make sense in modern New York. This is a solid middle grade and YA graphic novel. 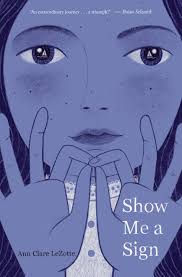 Show Me a Sign by Ann Clare LaZotte is one of the best books I have read in a long time. Period.

But no. Show Me a Sign grabbed me by the face and sucked me in like a waterspout and didn’t let go until well after the last page.

Now, look. I am the WORST book selector for my own reading. I’m that kid who is all “I don’t know… whatever …. yeah … fine” and then WHAMMO – you can’t talk to me and when you do all I want to talk about is THIS BOOK. I am a literary omnivore. I read almost anything without regard to genre – although I’m not a big fan of historical fiction because it reminds me of news, which is stuff that happened that I can’t do anything about so WHY ARE WE EVEN TALKING ABOUT IT!?!!? I am also not a big “blah-blah-blah characters discovering themselves” and talking endlessly about how they feel all the feels all the time … a lot of YA can be hard on me. But, in general, I will read just about anything.

So, I had this book for a while. I was underwhelmed by the cover – it is very monochromatic. I didn’t know what it was about, again, because I am a terrible book selector. Also, I didn’t read the jacket, any reviews, or the blurb. Hell, I thought it was an incredible show of maturity that I even read the prologue! But, I am incredibly glad I did.

“If you are reading this, I suppose you want to know more about the terrible events of last year – which I almost didn’t survive – and the community where I live.” (p.1)

Wow, well, now that you mention it … I did want to know about all the things and the community, even though just minutes before I had no idea I needed to know what had happened. And, damn, how did she survive? And, hang on, was she a she? (I flipped to the cover… probably? Maybe? Who cares!) and away we go!

For the record? That should be counted among the best first lines EVER. Bar none.

The book is narrated by a young girl, Mary, and is set in 1805 in a small Deaf community on Martha’s Vineyard. Her harrowing tale is chock full of evil and tragedy and humor and love and some of the most interesting people I’ve come across in a while. I am sure if you want there is all sorts of historical blah-blah-blah about the island – I don’t care, get to the evil bits!

The characters are incredibly fresh and real, even the minor ones that only appear on the edges are fully fleshed out with lives and stories I’m interested in. No one is all good. No one all bad — ok, well except this one dude. He is THE worst and reminds me of Tucker Carlson. You know the type …. screamy and creepy? Most of the characters are people, trying to get by in a very hard reality of the 1800s. LeZotte doesn’t ignore the fact that the town is on stolen land and she places Wampanoag folks front and center. But the books isn’t focused on them, it is Mary’s tale.

The thing I love is that Mary’s and the rest of the community’s Deaf identity is not THE thing. It is ONE thing but it is not all defining and consuming. Instead, being Deaf is part of an identity that each person enacts in different ways, just as we all enact our varied and common identities in a variety of ways. The evil that is front and center in this book is audism, which is discrimination, prejudice and oppression based on the belief that a hearing person is, by their very nature, superior in all ways to a Deaf person.

Basically, just freaking read it. Also, please understand, I have never wanted a harpoon to magically and stupidly appear in any book as I did in this one. That is yet another reason why I am not a writer. Go and buy this book or request it for curb-side pick-up.