Adding my voice to Teach Mentor Texts and Kellee and Ricki’s  Unleashing Readers on their great Monday-reading-palooza.

I’ve been catching up on reading that I put off during the teaching year. That means I am reading lots of children’s and young adult books, but it also means I am reading books for me … just me … BWA-HAHAHAHAHA!!!! I revisited Augusten Burroughs DRY, which feels like visiting an old friend who got me through some rough patches. I am also reading exciting academic works such as  Eliza Dresang’s Radical Change: Books for Youth in a Digital Age which is  helping me understand reading graphic novels is new ways.

In addition to the reading, summer for academics means it is the season to write. I’m working on revising articles that I hope will be in press soon, as well as a chapter based on work I started on this blog, as well as new articles based on projects that are slow but fruitful, such as looking at representations across Lambda and Stonewall award winning LGBTQ YA books.

But, enough about me. Lets talk books!

I have to admit a shameful secret – I had never read any of the How to Train Your Dragon by Cressida Cowell books. None. Not one. After seeing the second movie ***** SPOILER ALERT ***** and once again being amazed and impressed with the darkness and loss the movies have as part of the over all ethos I wanted to go back to the source material. In both movies something bad happens … Hiccup looses a limb in #1, and a parent in #2. This kind of emotional hardship isn’t seen in most movies today and my sons appreciate movies that don’t talk down to them and pretend life is nothing but rainbows and sparkles of goodness. But, maybe that’s just our family. ***** END SPOILER ALERT *****

I read this with my nine year old son and we were both surprised – in a good way – with the differences between the book and the movie. We discussed the departures from the book, especially the characters – we especially missed the twins and their outrageous craziness but liked the expanded adversarial relationship between Hiccup and Snotlout. When talking about Astrid, my son put it best, “Yeah, she’s cool and all but really? Do we need kissing? We’re kids!”.

The best part of the book? Toothless talks! Well, technically, all dragons talk and Hiccup is able to interpret them for us. Getting the view of the world from the dragon’s perspective was a terrific reading experience. Understanding dragons from thier own point of view allowed for a much more complex story and made Toothless’es act of bravery MORE impressive. He’s a droll little lazy dragon who takes bribes and doesn’t do anything he doesn’t want to do. In addition, the more than giant dragon called The Green Death is terrific and scary all at the same time.

We are planning on reading the rest of the books as the summer rolls on. 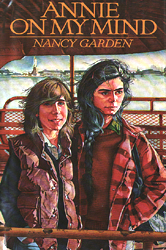 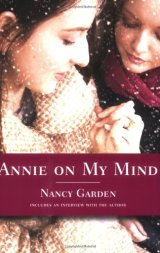 In celebration of a long lived life, I re-read Nancy Garden’s 1982 Annie on My Mind.Ms. Garden (May 15, 1938 – June 23, 2014) was a trail blazer if there ever was one. I’d like to say her book, written in a series of flashbacks by a college freshman at MIT was the beginning of a new era in YA literature featuring healthy, mutually loving relationships between lesbians, but it was not. It still stands out as the exception, rather than the rule and is a book I recommend to teachers, parents and readers alike.

The book cover has been changed over the years. The original featured a rather dower set of girls on the Staten Island ferry to the current one with a romantic photo of two girls looking at the rings that exchanged as Christmas gifts. But, what is most important is what happens inside the book or, perhaps, what does NOT happen. No one dies, goes insane, gets electroshock or sent to a camp for reprogramming. It isn’t that the romance progresses without a hitch, rather it is that the problems are surmountable, the issues are real, and the solutions are within reach if the girls are brave.

As for the test of time – the book holds up because the story is good and the characters are real.

Thank you Jarrett J. Krosoczka for writing Platypus Police Squad: The Frog Who Croaked. I am a huge fan of his Lunch Lady series (see previous post) so I was excited to download the audiobook and start in on it. The story is complex with lots of twists and turns and reads like a great version of noir mystery. Read by Johnny Heller, the audio book  reminds me of Raymond Chandler’s The Big Sleep but without all the drugs, sex and blood  and with more illegal fish.

In this piece of kids noir detective Rick Zengo is the new kid in the squad and Corey O’Malley is the old vet who needs to show him the ropes. They have some  trouble messing as a team but that quickly gets dealt with as they have bigger fish to fry. Yes, they happen to be platypuses, but don’t let their bills fool you, this is a hard hitting, action packed detective story. Although it isn’t as awesomely goofy as Lunch Lady, it still has loads of puns and lots of word play. This is a more serious book that requires the reader to track the story and remember loads of small details that become more important as the story progresses.

A great read aloud for some classes. I also highly recommend the audiobook.