“It was like coming home… only to no home I’d ever known…”
Sam Baldwin, Sleepless in Seattle

I talk about existing in the liminal spaces of identity. I am Latinx, and I am White. I have, as Albert Memmi called it, the face of the colonizer and the colonized.

Liminal space, if you are not familiar with the concept, is the space between. It is the space that is not easily defined. If you stand in a doorway between the kitchen and the living room, you are in neither room, and in both, and in a wholly new and unique space. Liminal spaces are often portals from one dimension to another and can feel unsettled and unsettling.

The idea of liminal space in Western thought and literature is often portrayed as portals, pathways, or doorways that separate different realities – look at Grimm Tales, Mother Goose, Hans Christian Anderson, C.S. Lewis, Lewis Carroll, and L. Frank Baum to name a few. But, in Western literature the realities are kept separate by the power of  liminal space.

But, in many Latinx narratives, liminal space doesn’t separate Oz and Kansas. Instead, realities exist, cross-over, intermix and influence each other in  constant dance. Think of La Llorona, or almost all of Isabel Allende’s books. These are the stories where familiar realities co-mingle with magic and become more than either one is capable of alone.  But, only a few can see, recognize and live within these spaces.

Isabel Quintero (author of Gabi, Girl in Pieces) and Zeke Peña explore one such artist in their graphic novel biography about photographer Graciela Iturbide. The book is written in sparse, detailed prose, using black and white images that call to and emerge from Iturbide’s photos. They also selected a few of her photos.

This is a biography of art, but not of the artist. There are few details of her youth, and personal life. Instead Quintero and Peña provide an open space for Iturbide’s photos to be studied and seen and felt.

I’d seen some of her photos in museums or art books, both in Los Angeles and in Sonora. I remember feeling confused about the work – it is beautiful and stark and rich all at the same time. She captured the Sonora desert, a place I was too young to remember but that I can sense in the back of my mind. My father admired her aesthetic voice, but was never sure her work was feminine enough. Her photos show the unrelenting beauty and majesty of the desert but she also showed people. 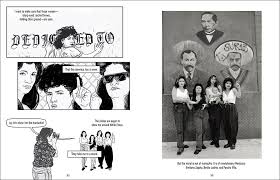 She has a series that focuses on an area of East LA and photographed Cholas being proud and poor, trapped by the dream of the United Stated, and standing powerfully together.

Her photos were full of people, animals, nature and sky, objects and space. Iturbide’s most famous photo is called Mujer Ángel. I clearly remember seeing the image and feeling the warm wind, the grit in my shoes, the sweat running down my neck. I was transported to the Sonora desert, behind a woman in a flowing white dress, with a black, lace mantilla, walking through the rocky desert carrying an enormous boom-box. While describing the photo Quintero quotes Iturbide, “It’s like this: when I look at a subject, the subject must always look back. Must always agree with the shot … That is the only way I will take a photograph. It is complicity.” Peña uses parts of the image, reimagining aspects and angles of the photo to recreate, or perhaps to create for the first time, the moments just before Iturbide’s shutter clicked and an image was transported from that place to the page. I grew up in Southern California and spent time in and around Nogales (both sides of the border) and in the Sonora desert when I was a kid. When I read PHOTOGRAPHIC: The Life of Graciela Iturbide, I feel that world again. Her photography exists in that space between, and within multiple realities. Reading this graphic novel gave me back glimpses I have forgotten and allowed me to see parts of me that are often hidden but always felt.