On November 23, 2018, AKA Black Friday, I was just sort of poodle-ing around FaceBook. You know, what I mean by poodle-ing, right? I was actively avoiding going anywhere near the malls by re-watching episodes of The Good Place for the 3rd time, and considering the wisdom of my pie to whipped cream ratio.

Judging a Book by It’s Cover

So, there I sat, looking at pictures of food and family gatherings, thinking about gifts, getting addresses for holiday cards, watching TV, cuddling my judgmental dog, and catching up on FaceBook posts. I have semi-left/am trying to ween myself from FaceBook and failing miserably so I end up reading lots of stuff all at once. 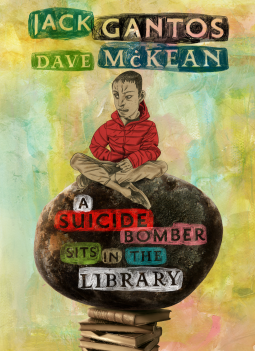 During my binge FB reading I saw long time children’s book champion, Teri Lesesne’s (AKA Professor Nana) October 10, 2018 public post about a new graphic novel by Jack Gantos. What caught my eye was the sheer incongruity between the title, A Suicide Bomber Sits in the Library, the cover image (provided), and the immediate praise for the book, “is a work of art.” I hoped I was misreading something – the dissonance was jarring.  And then I read further … “art of language accompanied by art of illustration. Combined in one spare tale, it will leave readers stunned, off kilter, maybe even a bit dizzy as they turn the page, the page that also turns them. Jack Gantos and Dave McKean have created a story of hate and redemption.

I found a few pages on the publisher’s website. I was struck by the abhorrent and racist representation of this unnamed, random “muslim”, young male protagonist. And, when I say unnamed I mean he is LITERALLY called “The suicide bomber” – like that’s his damn name. And, he’s supposed to be it a boy … and I use that term only because that is what the author claims … but he looks like a caricature of angry old man. The skin tones used in the book are pretty terrible – a sort of gray/tan/khaki color that is the same as the shirts and pants various characters wear.

Letter from the Asian Author Alliance

After receiving feedback from many in the #kidlit field, including an open letter from the Asian Author Alliance (read the letter here, and the followup here) Abrams pulled the book.  I’m not going to thank Abrams because HOW DID THIS THING GET PUBLISHED in the first place?

It is clear that the author, Jack Gantos, has no idea what the problem is as he continues to not listen to anyone but himself. Benjamin Doxtdator wrote a brilliant post about his experience of Gantos visiting his class here – Fact-Checking Jack Gantos. I think it is telling, and all too common, that Gatos has publicly reacted in surprise, defense, and frustration.  Doxtdator writes, “Gantos said that he was “shouted down” by an “online mob”, and now that he has been told to “stay in his lane”, he would “retreat” to his “white boy dog house.” His words make it clear that either he not understand, does not recognize, or simply does not care that he has contributed to a frighteningly large pile of racist tropes that portrays Muslim males as nothing more than terrorists.

The racist genesis of this book is important for me to point out. According to Gantos he was sitting in the Boston Public Library (BPL), a library I am intimately familiar with and love.  is always something happening; kids, teens, and adults constantly coming and going with books, using computers, having meetings, and meeting up. I work there a few times a month and consider it to be my library – I take ownership of the space when I am there and pay attention to the patrons and librarians. So, I can well imagine the scene Gantos describes in the author’s note;

Just then a boy’s cell phone went off. I turned and looked at him. He was wearing a red jacket. He was not holding a book. Instead, he reached into his pocked and pulled out a cell phone. He held it to his ear and did not speak. He nodded his head in agreement, then he stood up and quickly left the room through the doorway where overhead a paining of the Muse of Inspiration holds lightening bolts in his hands. One of these bolts struck me and I put my head down and wrote ‘A Suicide Bomber Sits in the Library’.

So, there it is. A White, male, adult saw a kid, who he perceived was not White, take a call and walk out of the library. I have no doubt the scene took place exactly as Gantos remembers it. It is a scene I have witnessed innumerable times at that library. But, the inspiration was not the kid, or the painting. The inspiration was his own bigotry, fear, and xenophobia.

Back on Facebook, I read Teri Lesesne’s public post, and the comments about the book pile up. Maybe not surprising, the comments were overwhelmingly positive and completely lacking in any critical pushback. The commenters were a children’s literature scholars, authors, teachers, and librarians.

I also checked Twitter, because in my experience Twitter is more likely to be the space where Critical Race Theory and other Social Justice oriented lenses are put into practice. So I searched #ASuicideBomberSitsintheLibrary and, yes, folks on facebook might have been celebrating the “captivating” story that was “amazing” them, but Twitter was having none of it. The first critical Tweet I read – and I am not saying it was THE first but it was the first one I saw, was from Heba Y. Amin (Twitter thread);

Two white guys write a book about a Middle-Eastern-ish suicide bomber CHILD?! in a non-descript Middle Eastern land?! in children’s book form?! masked as a lesson in reason and compassion?! I’m so dumbfounded by this.

She linked the preview from the publisher which clearly shows it is being published with children in mind.

Back to FaceBook and I see Dr. Debbie Reese (@debreese) interrupted the cheer-fest that was occurring, “Don’t know if anyone in this thread gave a thought to how this book would land with others, but it is not going well at the moment (Nov 22, 2018).” I added a comment directing readers toward Twitter. Alyson Beecher (@alysonbeecher) stated, “I did see that thread and for that reason I have similar concerns.”

Sarah Hamburg (@sarahrhamburg) pointed directly to the damage these kinds of characters and stories do in the real world,

Debbie Reese posted more from the publisher. Jillian Heise (@heisereads) posted the letter from Asian Author Alliance. Melinda R. Cordell (@rosefiend ) and Melanie Hope Greenberg (I’m not sure if she is on Twitter) both voices concern for the effect on actual kids by this book.

Then, in what I interpreted as a last ditch effort to save face for the author, Leslie Bermel (@Uryrwrds) asked, “You all do know the author is on this thread, right?” I asked how that changes the conversation and her response was “Doesn’t seem like a conversation anymore.” What surprised me was the “anymore“. Like, when it was accolades and flowers uncritically thrown at the feet of Jack Gantos, it was a conversation. But, when it changed to highlighting critical voices, then it was no longer a conversation. Why is that?

Again, the publisher pulled the book. Which is good. But, this is going to happen again and again and again unless we, as a community, learn to recognize characters and stories that are based in long held privilege and strive to erase those depictions. That’s one of the problems – these depictions are familiar to those privileged gatekeepers – like the first responders to the FactBook post. The initial look at that cover, the title, and the story was familiar and so it felt true, and interesting and amazing to those readers who were predominantly White and all non-muslim.

Publishing is a business. There is no reason for that business to change as long as  participating in familiar ways is rewarded. And publishers are rewarded by book people – librarians, teachers. scholars, and researchers – buying and recommending books.

That is the power of social media. There are more and more people becoming book people and letting publishers know we are here. We, those who are NOT represented by the imagined norm of White, straight, male, able, cis, middle class representation – are here. We are readers, we are teachers, we are librarians, we are scholars and we will continue to speak, even if when our voices shake. We will stand together and we will insist on a wider array of authentic representations from the literary world than the one we grew up with because we know stories matter.